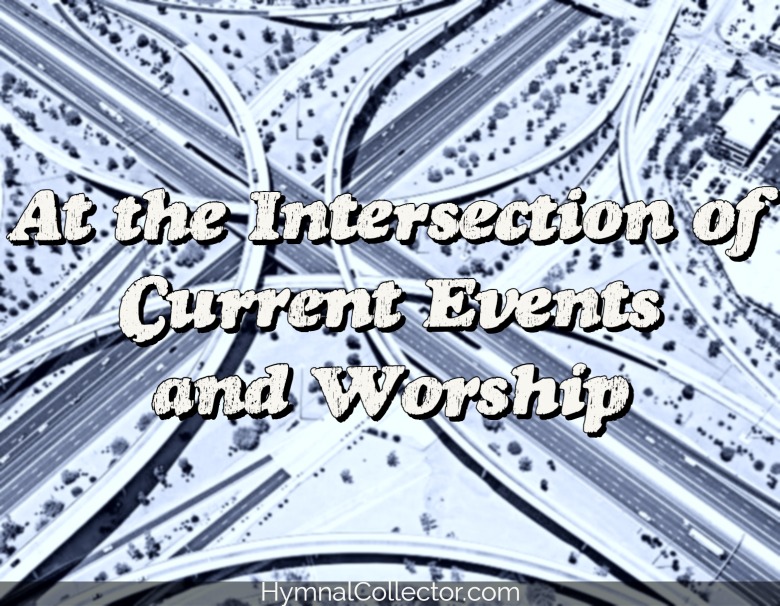 In our Wednesday night Bible study (2/23/22), we prayed for peace across Eastern Europe. Within three hours, missiles began to strike at targets in Ukraine and we awoke the next morning to the news that ground forces had entered that country. Since Thursday morning the world has watched with growing anxiety. Yesterday was Sunday (2/27/22), the day we have a voice. What was the church to say and do?

For some, the church’s weekly assembly is never affected by current events. Making an application of Jesus’ words that there will always be “wars and rumors of wars” (Matthew 24:6), they urge that the church rise above “earthly concerns” and solely focus on “spiritual concerns.” This mindset never interjects anything into the assembly based on or in response to current events.[1] In a slightly modified version of this approach, a congregation might mention a world event in prayer, but the sermon, songs, scripture readings, collection, and Lord’s Supper, proceed without a second thought to current events. As soon as sermons begin addressing or framing a Christian response to world happenings, preachers are encouraged to “read their Bibles more than their newspapers” and to “just preach the gospel.” Before the opening prayer and after the “final amen” people will be discussing world events, but in between them – so some think – is God’s time. Haven’t we heard invitations to “remove from our minds concerns and cares of this world” and to, contrastingly, “focus on God” during our time together?

I want to briefly offer a handful of reasons why I believe it is appropriate for the church to be contemporary (of our own time) while worshiping a timeless God.

The Lord is concerned about the violence of mankind

While focusing on God’s concern may sound like a reason to be non-contemporary, that would only be true under the assumption that the Lord is not concerned about bloodshed, warfare, and human suffering.

God is very concerned with the heart and conduct of mankind, especially when it turns to person-on-person abuse and violence. As sure as the voice of righteous Abel could be heard from bloodstained soil, God is concerned about aggression against humanity. It was for these reasons that God was grieved in the days of Noah (Genesis 4:23f; 6:6).

God is concerned about the destruction of animals, plants, and the land that supports them

“Whoever is righteous has regard for the life of his beast…” (Proverbs 12:10). The destruction of flora and fauna grieves God (Jeremiah 9:9f) as God is mindful of each sparrow that falls to the ground (Luke 12:6). As the ones who have received the stewardship of his “good” creation (Genesis 1:12, 21, 25), we should not be surprised at this concern, but we should share it (cf. Genesis 8:1; Jonah 4:11).

Not only is God concerned with aggression and pain, his concern is further engaged because it is our concern. We are told to cast our anxieties to the Lord because he cares for us (I Peter 5:7).

The word prophet brings to mind images of a predictor of future events, but a biblical prophet was only sometimes concerned with telling people the future. Most of the prophetic writings are about God’s judgment – sometimes commendation, sometimes condemnation – of the heart and actions of the nations of the world. The prophets were intensely contemporary as they applied the heart and word of God directly to the situations and choices of various peoples and kings. Unrighteous themes like idolatry (failure to love God), injustice (failure to love people), and other abuses are called out on every page of the prophetic books – not predicting what people would do in the future, but voicing God’s response to what they had done in the past and were doing presently. God’s prophets spoke to the contemporary world.

Following this First Covenant example, the New Testament church also wrestled with contemporary issues together as body. The very first gospel sermon was based on current events – Jesus of Nazareth, a man attested to you by God with mighty works and wonders and signs that God did through him in your midst, as you yourselves know” (Acts 2:22) – as much as it was scripture. In Acts 4:23-31 the church assembled to pray and sing Psalm 2, a reflection on geopolitical leaders and their refusal to submit to the prince of peace. Local events, often miraculous, were hand in hand with the preaching of the early church (Acts 9:32-35; 36-42). In Acts 11:19 the church is “scattered” and so the content of the preaching is “remain faithful to the Lord with steadfast purpose” (11:23). When Peter was arrested, the church’s prayers were focused on his situation (12:5). The Holy Spirit, through Paul, spoke directly to a political influencer and rebuked him for his sin as the gospel and regional politics came into conflict on the Island of Salamis (13:4-12). More examples abound. God’s church spoke to the contemporary world.

This is not a plea to replace the preaching of the gospel with a Christianity that is just another social program, but it is a plea to realize that the gospel is good news for the redemption of society as much as it is to the salvation of an individual man. It’s the message that echoes, “Glory to God in the highest, and on earth peace among those with whom he is pleased!” (Luke 2:14).

If the church today retains the prophetic mandate to speak God’s word and will to the world around is, we must be as contemporary as the prophets were.

God is active in the rise and fall of nations. Perhaps no greater lesson can be learned from the book of the prophet Daniel than this. To read the prophetic books of the Old Testament is to learn how God’s providence superintends the comings and goings of kings, potentates, rulers, kingdoms, and empires. God is concerned about these things because regularly he causes them and at the very least he allows them to happen – giving us the autonomy of free will: whether to his glory or to build our own. “…[T]he Most High rules the kingdom of men and gives it to whom he will and sets over it the lowliest of men” (Daniel 4:17; Psalm 2:1-12; Amos 3:3-8).

We must remind ourselves and proclaim to the world around us that global events are not accidents, but they are moved by the providence of God.

The church must be steeped in compassion

For those fleeing from a war-torn region

Obadiah, the fourth of the minor prophets, is a word against Edom, Israel’s brother-nation (descended from Jacob’s brother, Esau) to the south. The particular charge against Edom was that when Babylon attacked Jerusalem, southward-fleeing refugees passed nearby or through Edom, but the Edomites offered no humanitarian aid. Instead they “stood aloof,” picked off stragglers, and even handed refugees over to the Babylonians (1:10-14). This lack of compassion condemned the Edomites and sealed their own destruction: “As you have done, it shall be done to you; your deeds shall return on your own head” (1:15). If Obadiah is good preaching scripture, then these are words to hear in our assemblies in a time like this.

For our brothers and sisters who suffer

Paul wrote, “…as we have opportunity, let us do good to everyone, and especially to those who are of the household of faith” (Galatians 6:10). The Christian should love everyone, but he should show a particular urgency, diligence, and pathos in his love for a fellow Christian (Romans 12:10) because of the shared fellowship of Christ.

If Edom was condemned because they turned a blind eye to the plight of their Jacob-born brothers (Obadiah 10:10), then the stage is set for questions about Christians and our willingness to weep our brothers who weep, lamenting their losses, and sympathizing through their pain (Romans 12:15). The body of believers is a single unit – “if one member suffers, all suffer together” (I Corinthians 12:26). Both the rationality and emotionality of response to a tragedy are engaged to bring together a faith-filled response to suffering (James 2:14-17). This response is our obligation of indebtedness towards Jesus (cf. I John 3:16-18). As always, let our assemblies be the opportunity for us to “spur one another on to love and good deeds” (Hebrews 10:24f).

Worship Is an Act of Defiance and Witness

In worship, Christians offer an alternative narrative to the storyline promoted by the world. The values of each story-world are incompatibly different from one another, the heroes are avatars of different virtues, and victory is defined by different objectives. Christians believe that history is the story of God and his holy interaction with his creation. We believe that in worship we tell that story, recounting the great deeds of creation, salvation, redemption, sanctification, and glorification which we attribute to God. So often – virtually always – the world’s story is categorically incompatible with our story. To sing, preach, pray, recite, or otherwise rehearse God’s story is an act of subversion against the powers of this world.

When a Christian in the first century felt the tangible power of Rome that daily dictated, “Caesar is Lord,” at the point of a sword, he was offered a choice of loyalty to the lordship of Jesus and his story or allegiance to the lordship of Caesar. Which story would he tell? Rome’s story was illustrated by the legions that marched far and wide, the taxes that were mercilessly collected across the vast empire, and the opulent wealth of high-society Roman life. It was an act of defiance, personally and politically, to live in the story of Jesus rather than the story of Caesar.

And when you and I look around ourselves and see the chaos and hear the messages and narratives of this world, we must consciously choose to believe in the lordship and the love of Jesus. “Survival of the fittest” (the underpinning of all evolutionary philosophy), says the world, but Jesus goes out to seek the one lost sheep (Matthew 18:10-14), and loves him even while he was weak, ungodly, and full of sin (Romans 5:6-8). Our values are incompatible with the world’s. Our hero is sacrificial, not vanquishing.

When we sing these spiritual truths we declare with one united, congregational voice our affirmation of these truths and this narrative over and beyond the voices of this world. A lamb, a beast, and a dragon – which hero will overcome? Aren’t the three mismatched? How can a lamb defeat these terrifying monsters? Yet in the Christian story, we profess the victor to be the lamb who was sacrificially slain before the foundation of the cosmos. We know who is on the throne, even when our eyes see something else. In worship, we speak what we know to be truth: “To him who sits on the throne and to the Lamb be blessing and honor and glory and might forever and ever!” (Revelation 5:13).

Some degree of power belongs to the despot who commands armies, orders invasions, and conquers nations, but his power is limited by the power of the lamb. This message is worth our time to preach, to sing, to pray, to read, etc. As we declare the Christian story, it culminates in a glorious refrain: “Worthy are you, our Lord and God, to receive glory and honor and power…” (Revelation 4:11).

[1] Practically, this outlook sees God as inactive in the present world and closely resembles the outlook of the philosophy known as Deism, a belief popularized in Enlightenment-era England. Deism looked upon God as the absolute, self-existent, infinite Spirit, but minimized the revelation of God to man through scripture or even in Jesus (and, thus, minimized the knowability of God), preferring to understand God through reflection upon reason. From this platform, it was rejected that God ever intervenes in the natural order of things, after having created it.