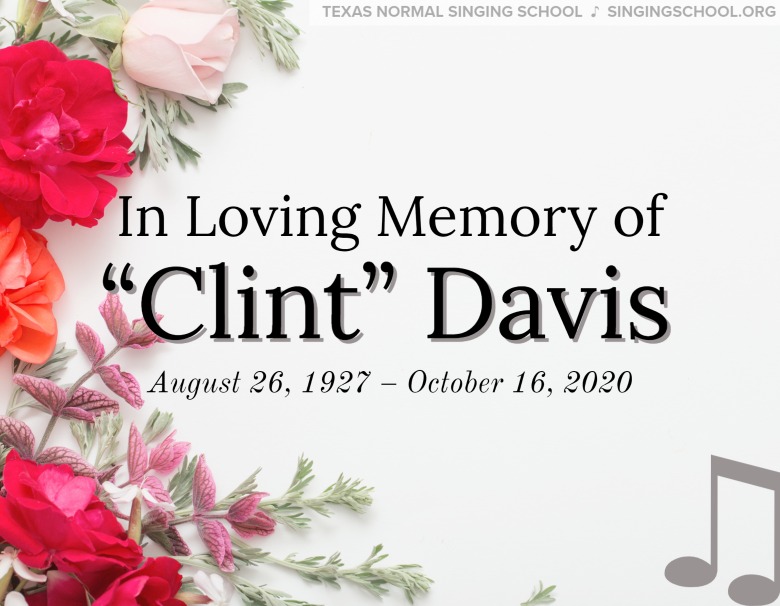 Clinton Edward Davis was born August 26, 1927, with a song in his heart. He went to be with the Lord October 16, 2020. At 93 years of age he still loved to go. Daily walks and playing pool were favorite activities.

Music and singing were the core of Clint’s existence. He learned to harmonize at a very young age by listening to his mother, Blanche, sing alto in church. He began leading singing at the age of 14 and continued to serve the Lord in this way into his early 90s. His desire to be a servant of God lead him to join a team of missionaries who spent six years in Copenhagen, Denmark. During those years Clint compiled a hymnbook, translating English hymns to Danish. His greatest accomplishment in Copenhagen was becoming acquainted with and then marrying fellow missionary Marcella Johnson on February 2, 1959. This happy union was followed by the births of Donna Sue and Kirk.

When the Davis family returned to the States in December 1963, Clint began his service as assistant minister and song leader with the Southside congregation in Lubbock. Over the next 55 years, he served in this capacity with the North ‘A’ and Tennessee congregation in Midland; the 7th Street congregation in Columbus, Mississippi; and the Parkview congregation in Sherman, where he also served as an elder.

His greatest joy was sharing his love of music with those who wanted to learn. For many years he taught song leading and sight reading in Summer singing schools. When Marcella became ill, he put his life on hold and selflessly devoted himself to her care until her death in 2015. Many a young man has been trained to lead singing by Clint and many a bride has walked down the aisleaccompanied by choral music arranged and directed by Clinton Davis. His love of singing and his love for the Lord has impacted many lives. The words of the hymn say it well:

“He Took my burdens all away, up to a brighter day. He gave me a song, a wonderful song!”